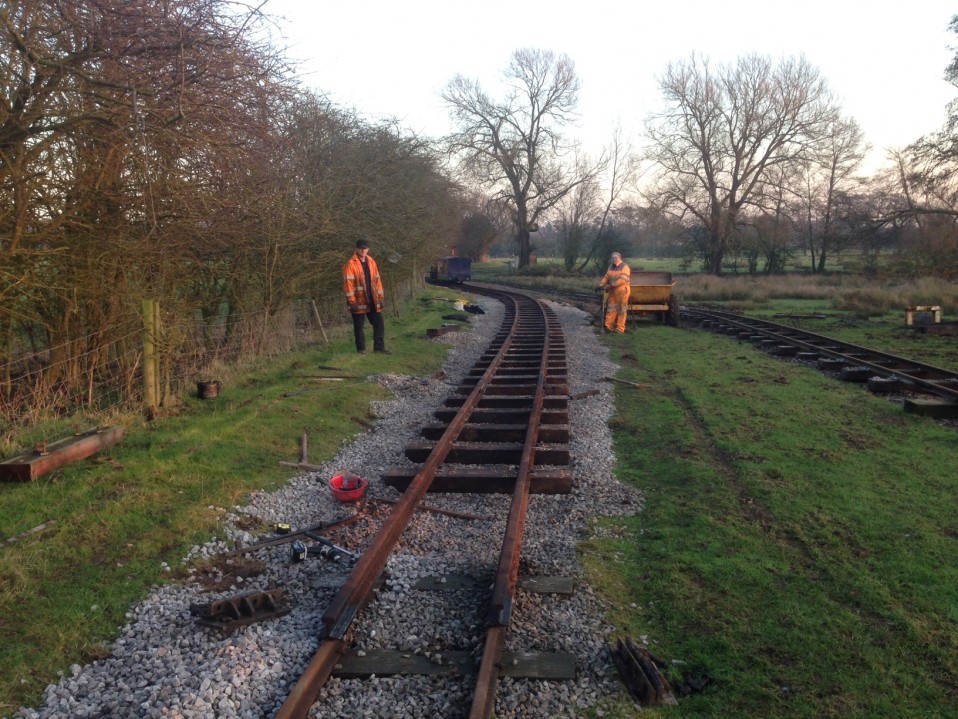 The project to relay part of the “mainline” between Stump Siding and the Mine in ex-Vale of Rheidol 48lb/yard rail has been moving faster than the ability of this website to keep up with it !! Three days of work in early January, aided by a hired-in mini digger, saw all of the existing 35lb/yard track panels removed and placed in position on a trackbed of reclaimed ballast parallel to the mainline where they will form part of the industrial railway. The mini digger made light work of  levelling the mainline trackbed and redistributing new ballast, so that the new sleepers could be set out in approximate position and the new rail laid out, the rail, sleepers and ballast having been pre-positioneded prior to the Santa Specials in December.

Two days of hard work by the “Wednesday team” has seen the sleepers set to final spacing, the rail bent and screwed down (this section of track being fastened with track clips and coach screws rather than dogspikes). The track is now ready for the closure rails to be cut and drilled so that the joggle fishplates linking the new 48lb/yard section to the 35lb/yd rail coming from Stump Siding can be fitted. After that ballasting, packing and levelling will take place.

A tremendous result from the hard work of a small team, especially considering the very wet and muddy conditions they have had to contend with.

Our photographs show some of the work in progress, culminating with the final picture showing the rails ready for closure, with the joggle plates in the foreground. The manrider, which has proved it’s worth for carrying the team a, tools and supplies to the workshite, can also be seen; in one photograph it has been hand-shunted along the newly laid industrial railway to bring it close to the mainline worksite.